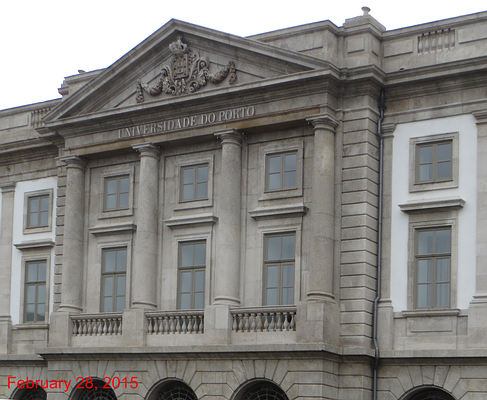 This might be one of the nicest squares in the Carmo district of Porto. The square with the fountain of lions. It got its name on 1936 in honor of Francisco Gomes Teixeira, a well known professor in the University of Porto. Around the square there are some buildings belong to the university, the Carmo Church and main roads to the city center. It is a walking distance from Sao Bento station, Livreria Lello and the beautiful Rua Galeria de Paris.

The fountain with lions around it, is one of the few water sources in the city.

This might be one of the nicest squares in the Carmo district of Porto. The square with the fountain of lions. It got its name on 1936 in honor of Francisco Gomes Teixeira, a well known professor in the University of Porto. Around the square there are some buildings belong to the university, the Carmo Church and main roads to the city center. It is a walking distance from Sao Bento station, Livreria Lello and the beautiful Rua Galeria de Paris. The fountain with lions around it, is one of the few water sources in the city.

The official designation of this square in Baixa do Porto is homage to Gomes Teixeira, a mathematician who was the first rector of the University of Porto. However, it is best known for the Praca dos Leoes (Lions Square), due to the granite and bronze fountain that exists in the central zone.

In fact, this place dates much earlier than the fountain and even the university itself. According to legend, in the 12th century, the first king of Portugal, D. Afonso Henriques and his wife, D. Mafalda, were on their way to Guimaraes when the queen fell on a precipice. In that moment of distress, each element of the couple invoked a saint. Grateful for having rid themselves of the danger, they built chapels in that place, Nossa Senhora da Graca and Sao Miguel-o-Anjo (already demolished). 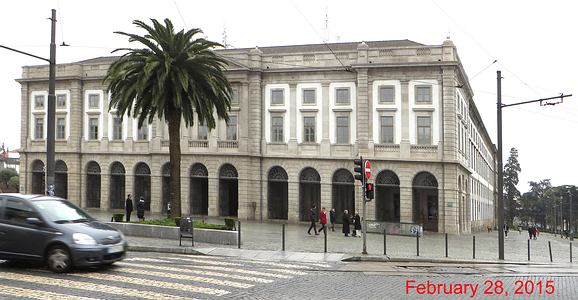 Already in the XVII century the Convento dos Carmelitas (where the GNR barracks is nowadays) and colleges where orphans were housed, which led to this place was also known as Largo do Carmo or Campo dos Meninos Orfaos. Later, and because flour and bread were sold there, it was also known as Praca do Pao (Bread Square) or Praca da Feira do Pao (Bread Market Square). Already in the XIX century, it became Praca dos Voluntarios da Rainha, thus honoring the liberal battalion of the Portuguese army that had occupied the Convento dos Carmelitas.

When the University of Porto was created, it was renamed Praca da Universidade and, later, Praca Gomes Teixeira.

The current building of the Rectory of the University of Porto was built throughout the nineteenth century and it also served as the Faculty of Sciences and Engineering. The square then gained a new life; the presence of the students was decisive for the emergence of cafes, such as the mythical Cafe Ancora d’Ouro (better known as O Piolho), bookstores and other services linked to academic life. The shops and warehouses nearby also created, along with the people of Porto and who visited the city, the habit of shopping in this area.

Nowadays it is one of the main places in Porto for nightlife activities and it continues to be a meeting point in the main moments of the academic life of the city, such as Queima das Fitas or the Reception to the new students of the University of Porto.

The fountain is located in an urban, isolated location, within the gardened Praca de Gomes Teixeira. 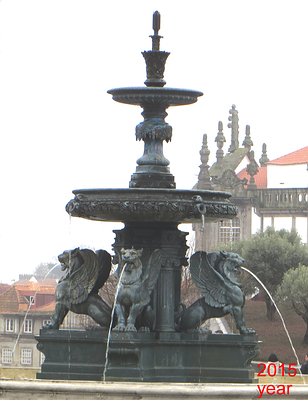 The Fountain of the Lions (Portuguese: Fonte dos Leoes), is a 19th-century fountain built by French company Compagnie Generale des Eaux pour l'Etranger, in the civil parish of Cedofeita, Santo Ildefonso, Se, Miragaia, Sao Nicolau e Vitoria in municipality of Porto. Cast by the Val d’Osne foundry in France, it is a copy, in most part, of the fountain in the Town Hall Square of Leicester, England

A competition was held in 1880, by the municipal water authority of Porto, under the direction of Antonio Pinto de Magalhaes (then president of Camara Municipal of Porto).[1] This resulted in an 1882 contract with the only submeter, the Compagnie Generale des Eaux pour l'Etranger.[1] A decree was issued on 17 July 1882, which elaborated the[clarification needed] and approved the provisional contract, which was promulgated on 27 July.

Work was initiated in 1883, to begin the supply of water to the city. This new project included a supply that included the design for the Lion fountain. On 30 August 1883, the design was rejected by the municipal commission, but on 13 August 1885, the municipal representatives approved the project sent by Carlos de Pezerat (4 July). Construction began on 25 September, and water began to flow as on 19 December 1886.

By 1 January 1887, the public water supply project for the city of Porto was concluded.

From 1942, the fountain was a less obligatory passage channels of the city, and began to be supplied by the Arca de Sa Noronha.

The central fountain has a cruciform layout with a group of sculptures at the base supported by four seated lions on the extremes. Between each lion, the axis of the source has a column with base, shaft and capital. To top, two central, circular cups superimposed and staggered, with a pine cone surmounting all. The octagonal shaped granite tank has rounded edges. The outer profile of the tank walls is corrugated. The edge of the lower plane bowl is outlined in relief by a frieze with plant elements interrupted only by four cornets from which water flows. 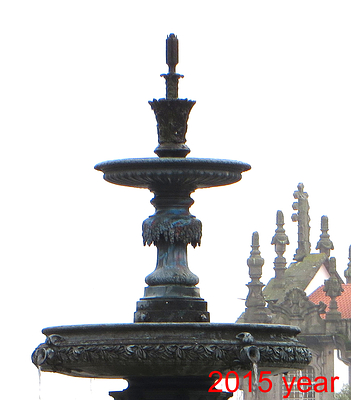 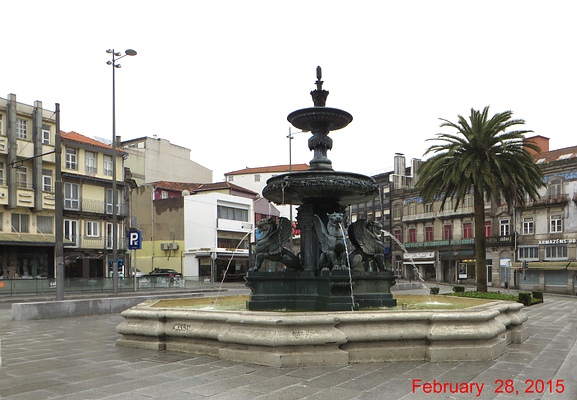 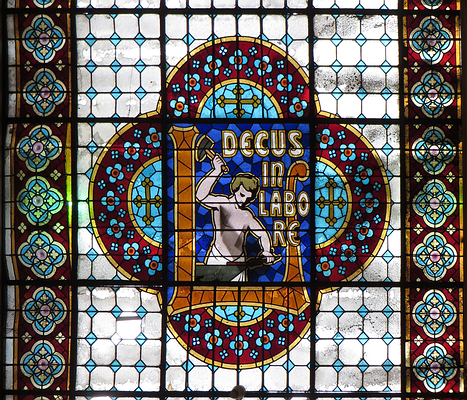 The building's exterior has a mixed architectural suggesting Neo-Gothic, and Art Nouveau elements, and in the interior, implied Art Deco elements.

The ample interior space is marked by a forked staircase connecting to a gallery on the first floor with detailed wood balusters.

Over this staircase is a large 8 by 3.5 metres stained glass window, with the central motto Decus in Labore and monogram of the owners.

The ceiling and interiors are treated exhaustively with painted plaster, designed to resemble sculpted wood surfaces and decorative elements. 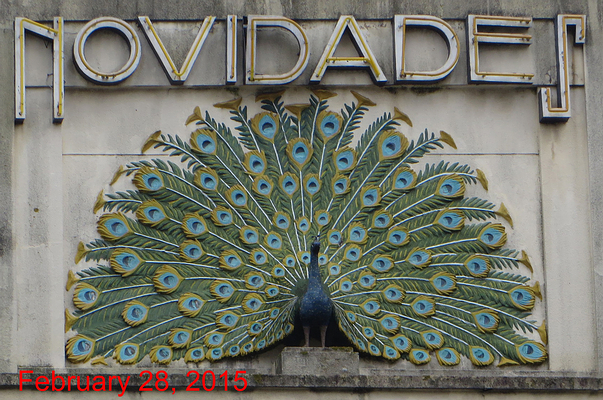 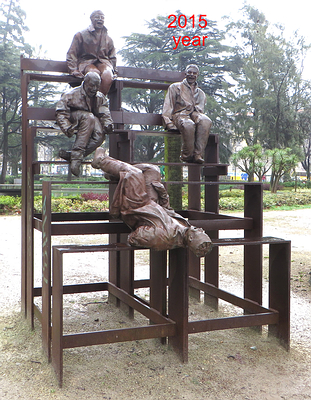