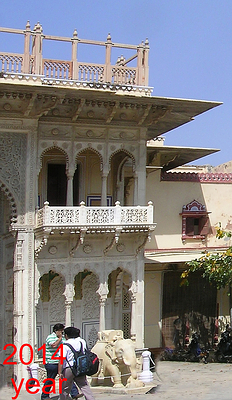 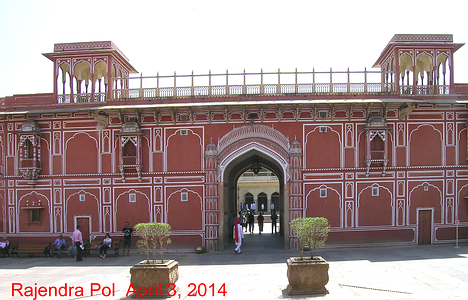 Right outside the Mubarak Mahal is a gate that portrays the flamboyant Hindu gatehouse architecture. The Rajendra Pol is flanked by two elephants both of which are carved out of a single marble. 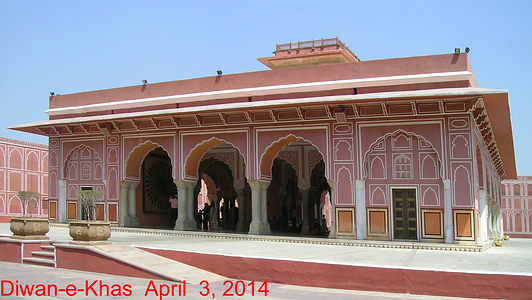 Diwan-I-Khas was a private audience hall of the Maharajas, a marble floored chamber. It is located between the armoury and the art gallery.

There are two huge sterling silver vessels of 1.6 metres height and each with capacity of 4000 litres and weighing 340 kilograms , on display here. They were made from 14000 melted silver coins without soldering. They are officially recorded by the Guinness Book of World Records as the world's largest sterling silver vessels.

These vessels were specially made by Maharaja Sawai Madho Singh II, who was a highly pious Hindu, to carry the water of the Ganges to drink on his trip to England in 1901 (for Edward VII's coronation) as he was finicky about committing religious sin by consuming the English water. Hence, the vessels are named as Gangajelies (Ganges-water urns). There are a number of crystal chandeliers hanging from the ceiling (normally covered with plastic sheets to prevent dust collection), which are uncovered on special occasions

Diwan-e-Khas (Hall of Private Audience) is considered as the most magnificent part of the glorious Amer Fort. The Diwan-e-Khas was the private audience hall of the maharajas who would covene with their advisors and courtesans here. The hall is adorned with marble floors and boasts of the most intricate architectural patterns. The jewels in the crown of the Diwan-e-Khas are the two huge silver containers on display here.

Put up on elevated pillars, Diwan-e-Khas is a beautiful open hall/courtyard of private audience. The pillars are laid with semiprecious stones engraved in white marble that make up for an amazing landscape. Even the floors have been laid in Italian Marble, with the old water fountain adding a mesmerizing charm and character to the place.

Housing a royal ambience, this magnificent monument represents a perfect amalgamation of both Mughal and Rajasthan style in its structural design. The hall resembles a lot like the ancient Hindu kingdoms, reminding about the Mughal era. You won’t be able to take your eyes off from the silver water jars that add to the purity and serenity of the courtyard.