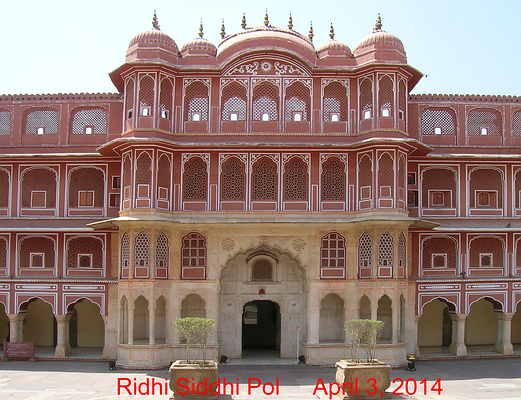 Ridhi Sidhi Pol, leading the way to Pritam Niwas Chowk, has both Rajput as well as Mughal architectural elements. This section is part of the City Palace complex and has been named after the main idol Lord Ganesha and his consorts, Ridhi and Sidhi. 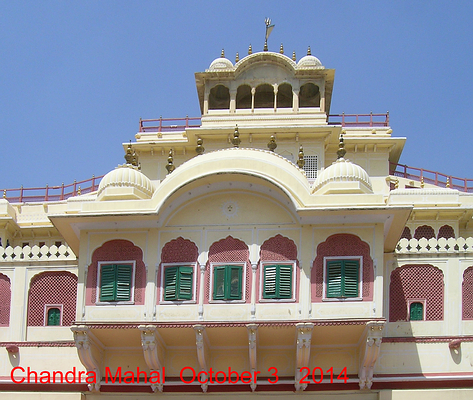 Chandra Mahal or Chandra Niwas is the most commanding building in the City Palace complex, on its west end. It is a seven-storeyed building and each floor has been given a specific name such as the Sukh-Niwas, Ranga-Mandir, Pitam-Niwas, Chabi-Niwas, Shri-Niwas and Mukut-Mandir or Mukut Mahal. It contains many unique paintings, mirror work on walls and floral decorations.

At present, most of this palace is the residence of the descendents of the former rulers of Jaipur. Only the ground floor is allowed for visitors where a museum is located that displays carpets, manuscripts and other items that belonged to the royal family.

There is beautiful peacock gate at the entry to the Mahal. It has screened balconies and a pavilion at the roof from where a panoramic view of the city can been seen. It is set amidst well laid out gardens and a decorative lake in the foreground.

The Palace has so many gateways that lead to important places inside its premises. One of such doorway is the Ridhi Sidhi Pol, which carries four small doorways. These smaller doorways are conspicuous since it represents the four seasons. Each portion of Ridhi Sidhi Pol is decorated with typical Rajasthani ornamentation, which is really outstanding.