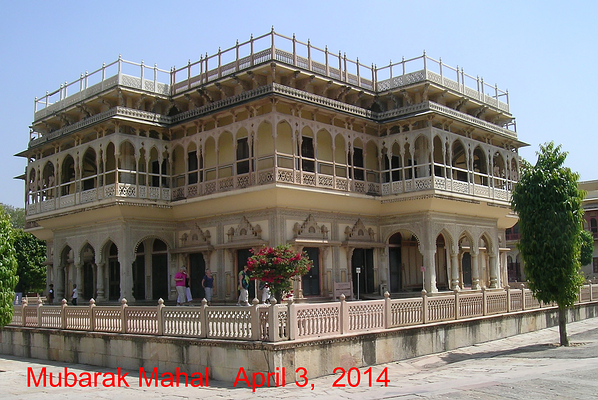 Mubarak Mahal, meaning the 'Auspicious Palace', was built with a fusion of the Islamic, Rajput and European architectural styles in the late 19th century by Maharaja Madho Singh II as reception centre.

It is a museum; a fine repository of variety of textiles such as the royal formal costumes, sanganeri block prints, embroidered shawls, Kashmiri pashminas and silk saris as part of the Maharaja Sawai Man Singh II Museum. A noteworthy display here is of the set of voluminous clothes worn by Sawai Madhosingh I, who was 1.2 metres (3.9 ft) wide and weighed 250 kilograms (550 lb) but interestingly had 108 wives.

The welcome palace, formally known as the Mubarak Mahal is a splendid structure, and a blend of the Islamic, Rajput and European architectural styles, built in the late 19th century by Maharaja Madho Singh II. History and art aficionados are in for a delight as the museum housed in the Mubarak Mahal showcases a fine repository of variety of textiles such as the royal costumes, sanganeri block prints, embroidered shawls, Kashmiri pashminas and silk saris. 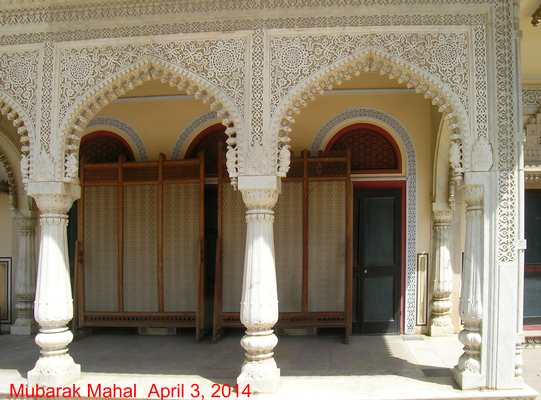 Mubarak Mahal: This is located in the first courtyard of City Palace. This Mahal was built by Maharaja Madho Singh II in the late 19th Century. This Mahal is also known as the Auspicious Palace. This Mahal contains the textiles of the Maharaja Sawai Man Singh II museum. Mubarak Mahal contains the architectural charm of the medieval India. This fabulous manor was built by the Rajputs of earlier times. Mubarak Mahal is a dazzling large Haveli which is famous for its structural charm. This haveli contains spacious rooms in it and the most attractive thing in this haveli is the reception hall, which has lovely things of Murals in it. The regal outlook is very beautiful. The ornamental pillers of it and its highly carved furniture are worth watching. You can see a fabulous gateway here which directly takes out to the Diwan-I-Khas. Diwan-I-Khas is an open hall. The tourist here can see the two silver vessels and admire them which are kept on for display here. Mubarak Mahal is the Palace of welcoming the tourists in the City Palace. 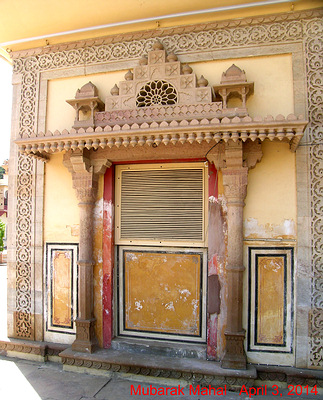 The first floor houses have fine muslins, Benares silks, local hand printed cottons and embroidered coats from north India. Beautiful musical instruments, many inlaid with ivory, are here, as are Jaipur blue pottery, Mughal glass, hookah bases and delightful toys for young royals. The attractive part of the museum is the display set of voluminous clothes worn by Sawai Madhosingh I, who was 1.2 metres (3.9 ft) wide and weighed 250 kilograms (550 lb) but interestingly had 108 wives. Most significant feature of this elaborate citadel is the vast courtyard, which surrounds the entire building.

Chandra Mahal: It is also known as the Moon Palace. The Mahal is located in the capital of Rajasthan. This Mahal is situated in the northern western side. This museum was built in the year 1729 and continued till 1732. The Mahal was built by Sawai Jai Singh II initially who was a ruler of Amber. He planned and built the museum but later the changes were made in the Mahal till 20th century.

In Chandra Mahal there is fantastic inner courtyard where you can see four different gates that represent four different seasons: the Peacock Gate is associated with autumn, the Green Gate – with summer, the Leheriya gate with spring, the Rose Gate with winter. Each gate is decorated with different kinds of flowers. This is the main palace which imposes the traditional Rajasthan in it and also comprises of Mughal architecture. Chandra Mahal is the place where the present Raja of the Jaipur resides. That’s why only the ground floor is allowed for visiting. It has various gardens in it.

This palace has various collections in it like floral decorations, lovely paintings, mirrored walls and highly decorated ceilings. 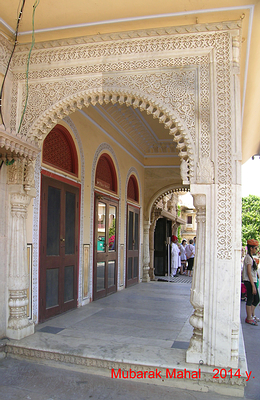 This Mahal has seven multi stories in it. Each story has its individual name of it which sheers beauty and luxury of the Rajputs. Each floor displays the royal elegance in it. The ground and the first floor have the museum of Maharaja Sawai Singh II while the third floor contains the drawing room and dining room. Mirror walls are shown in the fourth floor where the Raja enjoys the glittering of lights in the night. The fifth floor is the Maharaja’s retreat in the rainy season. One can enjoy the wonderful view of the jagged hills from the sixth floor of the Mahal. The seventh floor of Chandra Mahal is called as the crown of the building also named as Mukut Mahal as it is the top most floor of the Mahal. The Shobha Nivas and the Sukh Nivas are still occupied by the present Maharaja. 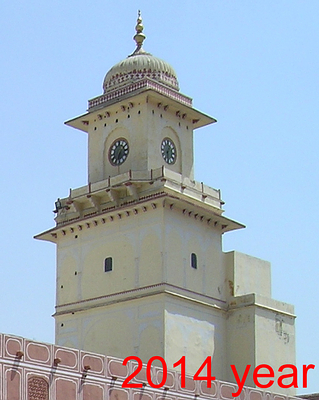