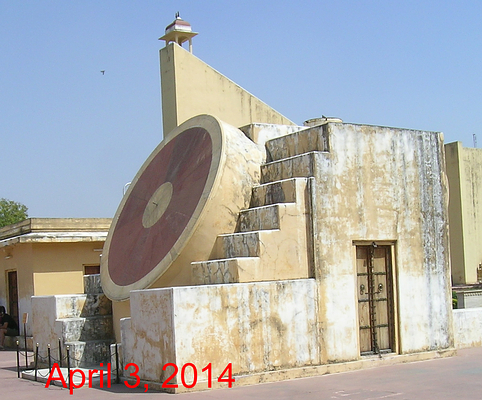 One of the highlights of the Jaipur Jantar Mantar are the dozen precisely angled structures that each target a specific constellation. Most of these were restored in 1901 and have been well-maintained up to the present day.

The name is derived from jantar (yantra, Sanskrit "instrument, machine"), and mantar (from mantrana, Sanskrit: "consult, calculate"). Therefore, Jantar Mantar literally means 'calculating instrument'. The instruments allow the observation of astronomical positions with the naked eye. The monument expresses architectural innovations, as well as the coming together of ideas from different religious and social beliefs in 18th-century India. The observatory is an example of the Ptolemaic positional astronomy which was shared by many civilizations.

The observatory consists of nineteen instruments for measuring time, predicting eclipses, tracking location of major stars as the earth orbits around the sun, ascertaining the declinations of planets, and determining the celestial altitudes and related ephemerides. 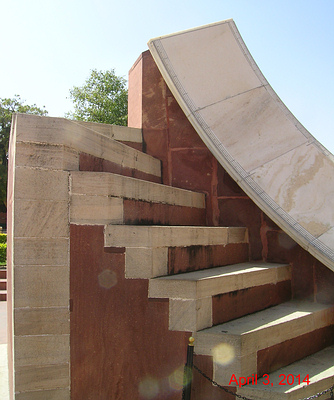 Chakra Yantra (four semicircular arcs on which a gnomon casts a shadow, thereby giving the declination of the Sun at four specified times of the day. This data corresponds to noon at four observatories around the world (Greenwich in UK, Zurich in Switzerland, Notke in Japan and Saitchen in the Pacific); this is equivalent of a wall of clocks registering local times in different parts of the world.)

Digamsha Yantra (a pillar in the middle of two concentric outer circles, used to measure azimuth of the sun, and to calculate the time of sunrise and sunset forecasts)

Kapali Yantra (measures coordinates of celestial bodies in azimuth and equatorial systems, any point in sky can be visually transformed from one coordinate system to another) 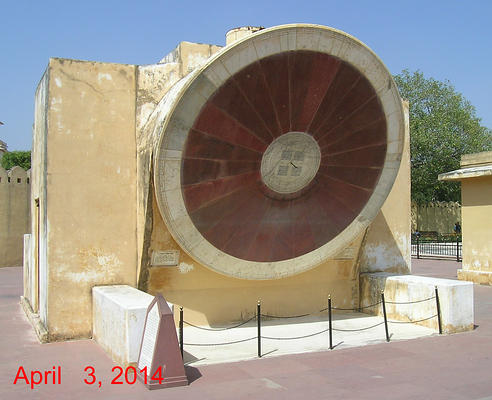 Nadi Valaya Yantra (two sundials on different faces of the instrument, the two faces represent north and south hemispheres, the accuracy of the instrument in measuring the time is less than a minute)

Shastansh Yantra (next to Vrihat Samrat Yantra, this instrument is a 60 degree arc built in the meridian plane within a dark chamber. At noon, the sun's pinhole image falls on a scale below enabling the observer to measure the zenith distance, declination, and the diameter of the Sun.)

Unnatasha Yantra (a metal ring divided into four segments by horizontal and vertical lines, with a hole in the middle; the position and orientation of the instrument allows measurement of the altitude of celestial bodies)

Yantra Raj Yantra (a 2.43-metre bronze astrolabe, one of the largest in the world, used only once a year, calculates the Hindu calendar) 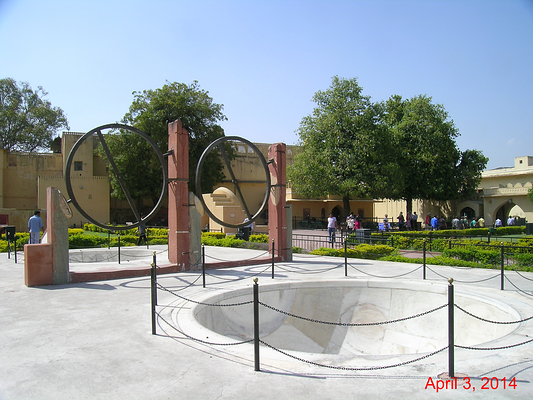 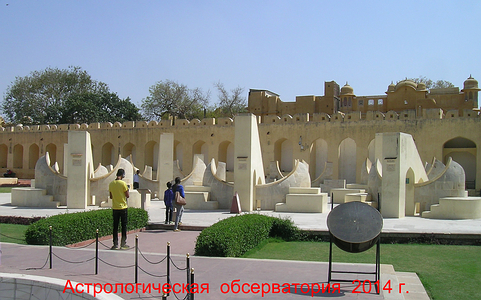 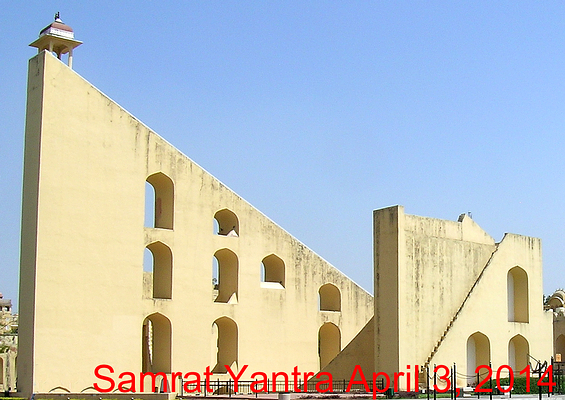 Samrat Yantra is another important instrument in the Jaipur observatory, Jantar Mantar. It is called the Samrat Yantra because it is the biggest instrument at Jantar Mantar, Jaipur. It is also famous for its accurate construction. Time can be calculated by observing the solar system. This instrument can calculate local time that is correct upto 2 seconds. The gnomon of this sundial is 90 feet high. There are niches in the wall so that the storm does not affect the instrument.

The gnomon of the Samrat Yantra is located on the right-angled wall and the hypotenuse has steps to climb up. This also has a scale, which is helpful in finding the altitude of the sun. The hypotenuse points out towards a pole. This pole has on its either side a masonary quadrant. The sides of the quadrant are marked in hours, minutes and seconds. On the scale 1 minute has been divided into 30 parts. This division helps in measuring the divisions accurately.

The samrat yantra, for instance, which is a sundial, can be used to tell the time to an accuracy of about two seconds in Jaipur local time. The Giant Sundial, known as the Samrat Yantra (The Supreme Instrument) is one of the world's largest sundials , standing 27 metres tall. 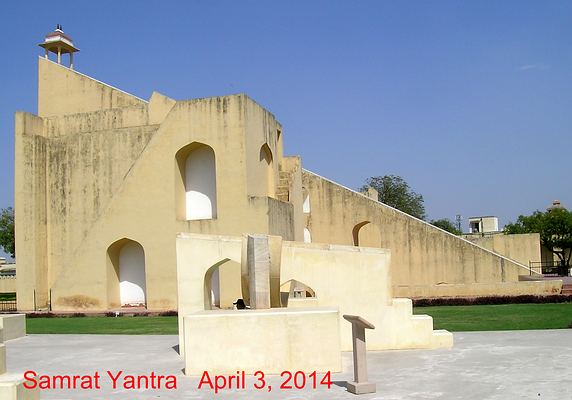 The most imposing of the Jaipur Jantar Mantar’s astronomical structures is the giant sundial known as the Samrat Yantra (The Supreme Instrument). A staircase rises 27 meters (88.5 ft) to a small cupola where notable readings were announced. With instruments of this type, size does matter: the Samrat Yantra is the world’s largest sundial and can tell the time with an accuracy of 2 seconds.

The measuring surfaces of the Samrat Yantra and other calculating instruments are faced with white marble and have incised notches used to note the path of the sun’s shadow. Observers can actually view the progress of the shadow, which moves at a rate of 1 mm 1/25 of an inch) per second, or 6 cm (2.4 inches) per minute.

The small Sun dial or Laghu Samrat Yantra is the instrument used for time calculation. From one side wall is inclined at an angle of 27 which is equivalent to latitude of Jaipur. It is graduated to the scale of tangent, to find out the declination angle of the sun.

On each side of gnomon, there are two quadrants. The left for time in the morning and right for afternoon. Both the quadrants are divided by 6 hrs, 60 min. and each minute by 60 seconds. With the help of the shadow of the gnomon which falls on one of the quadrants, we find out the time of Jaipur.

The unique impression of the Jantar Mantar results from the combination of modern mathematical precision with the rich patina of time. As such, the captivating angles and curves of the instruments appeal greatly to painters and photographers.

As for the Chakra Yantra, it is an instrument for finding the right ascension and declination of a planet or other celestial body observed at night.

To understand these coordinates, it may help if you visualize the earth's lines of longitude and latitude projected up onto the sky, such that the north star corresponds to earth's north pole. Earthly latitude is the angular distance north or south of the equator, and earthly longitude is the angular distance around the polar axis as measured from any arbitrary starting point - in this case, the meridian of Jaipur.

Now say you want to locate a planet in the sky. You do that the same way you would locate a spot on earth, by moving down from the north pole to the correct latitude and then moving around that circle of latitude until you reach the correct longitude. When you do this on the celestial sphere instead of the earthly one, you get the celestial coordinates of declination and right ascension.

The Chakra Yantra lets you measure these coordinates. The axis of the metal circle (I will discuss only one of the pair; the other is, apparently, the same) is perpendicular to the crossbar (notice where the axis is attached to the upright posts). The axis points towards the north pole, and the circle pivots around this axis. In the middle of the circle is a hole for attaching a sighting tube, which pivots around the circumference of the circle. (You don't see a sighting tube in the photo, because one is not currently attached to the instrument, so just pretend that it's there.)

To find a planet, imagine that the whole contraption, circle and sighting tube, is aimed at the north star (perpendicular to the crossbar), and that the planet is (let's say) 10 degrees below and 20 degrees to the right of the north star. Imagine how you have to move the sighting tube to see the planet. First of all, you pivot the sighting tube 10 degrees down the metal circle. This is the declination, 10 degrees below north, marked as such on the circle. Then you have to pivot the metal circle 20 degrees counterclockwise around its axis. This gives you the right ascension, which is marked on a disk at the base of the axis.