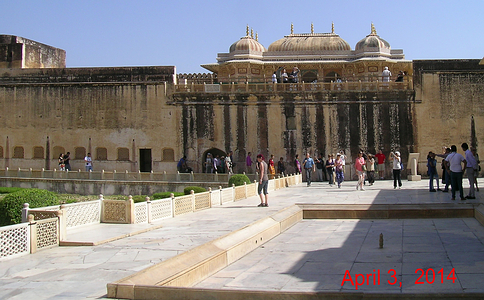 In centre of the garden is a star liked geometrical shaped tank, with a fountain in its centre, the water in the fountain is channeled from the tank built above Sukh Mandir. The Mughal Garden is a hexagonal grade which has four paths connecting it to with the fort; hence it is also named as “Charbagh”.

It is named as Mughal Garden because of the Islamic architecture used in designing and building the garden.

The aim of making this garden was to give the fort a luxurious and imperial look which has all the comfortable and luxurious amenities for the king.

The King used to change his living area according to the season, in winters he use to live in Diwaan-e-khaas, and in summers the kings shifts to the Sukh Mandir, hence the King use to stay in Diwaan-khaas in chilly winters the Sheesh Mahal use to keep the living area hot in winter, and in the sunny days the king used to sit and relax in the garden.

The Jaipur authority is responsible for maintaining the beauty of the fort and its neighbouring areas.

Mughal gardens are gardens built by the Mughals in the Islamic style. This style was influenced by Persian gardens. They are built in the char bagh structure, which is a quadrilateral garden layout based on the four gardens of Paradise mentioned in the Qur'an. This style is intended to create a representation of an earthly utopia in which humans co-exist in perfect harmony with all elements of nature.

The quadrilateral garden is divided by walkways or flowing water into four smaller parts. Significant use of rectilinear layouts are made within the walled enclosures. Some of the typical features include pools, fountains and canals inside the gardens.

Some famous examples of Mughal gardens are the Bagh-e-Babur at Kabul, Mehtab Bagh gardens at the Taj Mahal, gardens at Humayun's Tomb, Shalimar Gardens at Lahore, Khusro Bagh at Prayagraj, as well as Pinjore Gardens at Haryana.